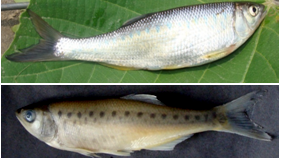 Sort out any fish having oblong bluish spots along sides of the body:

………place them labeled as either Barilius or Raiamas sp.

Interestingly, in the streams of Eastern Doon (Uttarakhand), specially River Song at Teen Paani (at Golatappar swamp forest, in Barakot forest range, close to Raiwala, about 50 km from Dehradun city), flowing through forest thickets on the clayey, rocky and pebbly bed, harbours two ‘TROUT LIKE’ species which, though different in their body profile and total length range, similarly exhibit the presence of 2 or more rows of bluish spots/ blotches along sides. They can be easily characterized into species belonging to 2 different Genera viz., Barilius tileo (10.0 – 18.0 cm) and Raiamas bola (10.0 – 29.5 cm), on the basis of the following:

Trout like, compressed laterally, ventral profile more arched than the dorsal. Cleft of mouth deep and directed upwards. Barbel 2 pairs, one small rostral and one small maxillary pair; rostral originating slightly anterior to the anterior border of the nostril and about the middle of the snout length at a point where a suture separates pre-orbital and nasal bone; maxillary pair originating a bit prior to the end of maxilla and to below about 1/4th of the diameter of eye. Bluish-brown along the dorsum, becoming silvery on the flanks and belly; with 2 – 4 irregular rows of vertically oval bluish black blotches of varying sizes on the sides, 14 – 16 being in the first row. Dorsal fin greyish. Pectoral, pelvic and anal fins lemon yellow. Caudal fin greyish, more so on the lower lobe. There is a well-marked sexual dimorphism, males with tubercles at the lower mandibular surface, snout and scales; Ist unbranched ray and I and II branched rays of pectorals being osseous and thickened. 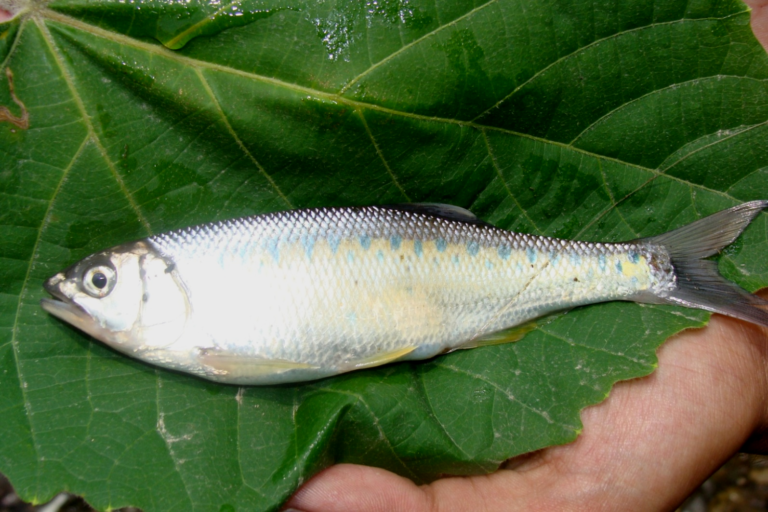 Body trout like, long, sub cylindrical and slender. Barbel 1 pair, very short maxillary, just above the angle of jaws. Cleft of mouth deep (salmon like), directed obliquely upwards. Lower jaw with a symphyseal knob, fitting into a medial notch of the upper jaw. Silvery-greyish (or steel grey) with 3 – 5 rows of blue-green irregularly arranged oblong blotches on the sides, may be extending up to head, 14 – 16 in the first row, the blotches of the successive rows showing an alternate arrangement.

Having a ‘least concerned status (IUCN, 2011)’, it comfortably frequents the serene Song River stretch in the Golatappar forest swamp region, not much disturbed by anthropogenic activities. The maximum size recorded was about 29.5 cm, the same as observed by Hora and Mukerji (1936) more than 80 years ago when they described ‘Fishes of the Eastern Doon’.

Presence of Barbels in Raiamas bola !!

Both the statements need correction, as the presence of barbel has been noticed here in a specimen (about 29.5 cm) from Eastern Doon (Uttarakhand), which definitely is not a juvenile. Presence of barbel had also been noticed in the specimens studied, from upper plateau segment of river Ken (Banda district, UP, India) way back during 1977 – 1982, the young specimens (3.6 – 5.9 cm) also showing similar presence.

A study on the young specimens of Raiamas bola (=Barilius bola) Raiamas bola: One of the young specimens collected (and studied during 1977 – 1982) from river
Ken (Banda district, Buldelkhand, Uttar Pradesh, India)

The Song River flowing downstream towards Ganga at Raiwala