An exercise to recollect the ‘content’ decimated so far from ‘Segregation of Lot 1 – Lot 13’.

The ‘improvisation’ attempted in the episode entitled, ‘Instant Identification of Indian Freshwater Fish in the Field’ [pl. refer to the Home page] included the content for the benefit of the ‘students’ and the like, pursuing ‘Ichthyology’ as their main stream of study.

In the ‘Introductory Episode’ [pl. refer to the Home page] it was highlighted that,

“….The Alpha (α ) taxonomy is the starting point of any Faunistic  / Taxonomic work related with ICHTHYOLOGY, providing authentic guidelines for the academia engaged in routine studies or researches. All this begins with venturing into the field and procure fish samples through various (animal specific) collection techniques.

Whenever a field trip is organized for the UG / PG students pursuing ‘Fish and Fishery’ specialization at Bachelor in Fishery Science (B.F. Sc.) or at M.Sc. Zoology level or at Masters of Fishery Science (M.F. Sc.) level or any student is aspirant of carrying out research work on Fish Taxonomy or others aspect(s), he/she must be well-acquainted with the kind of  fish wealth found in the streams or standing water of areas selected for study; may be hilly tracts of Himalayas, Peninsular region or the plains (like Gangetic plain etc.).

Additionally, the students hailing from coastal areas, too, must develop expertise to identify at least most common fishes (may be cartilaginous or bony) caught by the local fishermen along the sea coasts (or in brackish waters) or know about the fishes being sold in the market”.

Regular visit to local fish market(s) is also a good exercise to have a record of edible small or large-sized fishes.

This all can only be possible after rigorous training and getting very sharp ‘field tips’ for identification under the able guidance of his/her teacher.

The main article takes shape by including the following heads:

The prime logic of suggesting ‘Instant Identification of fish in the field’ is because of the fact that the colourful adornments of FISHES can only be recorded when they are live. It is not to be emphasized that most fishes have their Genus/Species specific colourations which mostly fade out on preservation over a period of time. Other taxonomic exercises (like meristics or morphometrics) can be performed even after preservation but observing and recording characteristic colour patterns is possible in the field itself.

Moreover, a good photographic camera can serve the purpose in a better way, snapping all details in close-ups. In this case, study can be done with the photographs at one’s own convenience in laboratory. Studies to be published can tell the story very well if live photographs are supplemented with the textual matter.

With reference to ‘Some most prominent ‘tips’ to segregate fish(es), from the streams of Eastern and Western Doon (Uttarakhand), it has been suggested that:

“……. In an assemblage of fish catch, fishes can be sorted out and put in store as separate ‘Lots’ by putting tentative labels on them. The following is just to lay emphasis on the instant exercise (observing more attracting or prominent diagnostic morphological or colour pattern characteristics) in the field.

The real Taxonomic exercise can be accomplished after consulting the literature (hard copy or soft/web copy resources) available”.

From the sample collections in the field / market [Doon Valley, Uttarakhand or Banda district, Uttar Pradesh, India], as many as 14 Lots are made on the basis of diagnostic morphological or colour characterizations done in the field/market, as follows:

Sort out small sized fishes with a prominent BLACK BLOTCH at the base of caudal fin, along with one behind gill cover or one at the base of dorsal fin:

Sort out the fish which have jaws prolonged into a beak:

……place them labeled as Needle Fishes or Belonids may be!

Sort out bright silvery, laterally compressed fish with a black spot at base of every scale and ‘=’ – like black spot marks along the lateral line or vertical bands on the sides:

….. place them labeled as Barilius sp. may be!

Sort out any fish having oblong bluish spots along sides of the body:

………place them labeled as either Barilius or Raiamas sp. may be!

Sort out the fish(es) with a dark bluish black band running from snout to the base of caudal fin:

……… place them labeled as either Rasbora or Esomus sp. may be!

Sort out small-sized laterally compressed fishes with peacock blue hue below lateral line, yellowish vertical bands and a stripe of dark pigmentation along mid lateral side, terminating at the base of caudal peduncle or beyond: 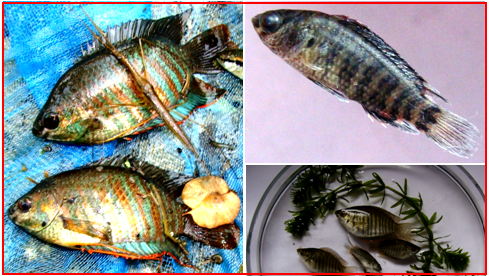 ……… place them labeled as either Trichogaster / Colisa / Badis sp. may be!

Sort out the fishes which have a SNAKE (= Eel) LIKE body:

…place them tentatively labeled as Freshwater spiny eels or Mastacembelids may be!

……. place them labeled as Snake Heads or Murrels or Channids may be!

Sort out fish(es) having the presence of considerably long filamentous extensions of skin around mouth (barbels):

………place them labeled as CAT FISHES may be!

…….. place them in one lot collectively labeled as Minnows or

Minor Carps or Mahseers or Suckerfish etc. may be!

Sort out small-sized silvery fishes with deciduous scales, blunt snout, eye almost in the middle of the head, dorsum (back of the body) brownish and some exuding more turmeric yellow mucous from below the rounded abdomen:

………… place them labeled as Aspidoparia sp. may be!

CONFIRMATION OF THE ‘FIELD TIPS’

Characterization of the Lot 1 – 14

After putting the samples collected in the field under Lots 1 – 14, each Lot is segregated into Genus (Genera) or Species on the basis of diagnostic morphological features and colour patterns. The meristic and morphometeric characterization can be done afterwards, taking the help of standard works like those of Day , 1878; Jayaram, 1981 & 1999; Talwar and Jhingran, 1991; Nelson , 2006 & 2016; Vishawanath et al., 2007 etc.; along with the details available with FishBase: A Global Information System on Fishes [https://www.fishbase.se;