❖    THE LANGUAGE OF BIOLOGISTS

❖    SOWING SEEDS OF SYSTEMATICS / TAXONOMY AT THE GRASSROOT LEVEL

⮚    Recollecting the Introduction of  PART – 1:

4.       A list or collection of the words or phrases of a language, technical field etc

The animals commonly known as ‘ribbon worms’, ‘bootlace worms’ or ‘proboscis worms’ are among about 1,149 species belonging to about 250 Genera, included under Phylum- Nemertea, with a well-defined ‘bilateral symmetry’ and ‘tissue organ grade of body organization’.

Etymology of the Phylum

Gk. nemertes = a nereid in Gk. mythology; = Latin Nereis = sea nymph or Gk. Nereis from Nereus = the sea God Nereus + Gk. –ides, Latin –idea or –ida = a suffix, as in ‘nereid’, indicating offspring of, descendant of.

Explanation: In Greek mythology sea-nymph Nemertes was one of the daughters of Nereus (> Nereis) and Doris. The name Nereis is also akin to the name of an Annelidan Genus Nereis having sharp retractable or protractible jaws; showing similarity with the protractible ‘Proboscis’ of ‘Nemerteans’.

Explanation: The animals with a ‘hollow snout’ i.e., indicating about the long, thread-like proboscis.

●        Bootlace Worms: So called as resembling to a cord or leather strip used for lacing boots. This name is familiar with the longest (55.0 m) known marine, European Nemertean worm, Lineus longissimus (Latin linea = line, cord + longissimus = the longest) whose mucus is highly toxic.

●       Proboscis Worms: So called as having a diagnostic, eversible (turning inside out) ‘proboscis’ [Gk. proboskis = means of obtaining food, or – pro = before + boskein = cause to feed], emerging just above the mouth and capturing the prey by using venom.

Unique to the Phylum, the ‘Proboscis’ is an elongate, eversible, blind tube, surrounded by rhynchocoel (a fluid-filled hydrostatic cavity) and additional muscle layers, including proboscis retractor muscle at the posterior wall of the rhynchocoel. It is either connected directly to the foregut or opens through a proboscis pore. In many species, the proboscis is provided with nail-shaped, piercing barbs or stylets, typically used to trap prey. The stylet may also be used for burrowing; in land-dwelling species it may be used for rapid movement.

The first hitherto known report of a Nemertean is by William Borlase (1758), who described a ‘Sea Long Worm’. The species was named by Gunnerus (1770) as Ascaris longissima  while Sowerby (1806) was the first to use its present name, Lineus longissimus. For quite long, in historical accounts Nemerteans were included under Genus Planaria (Phylum – Platyhelminthes), until 1817 when the French naturalist Georges Cuvier recognized their differences and unaware of the previous names applied to the species, placed  Lineus longissimus in Genus Nemertes, from which the name of the Phylum takes its origin. In 1859, German Anatomist Karl Gegenbaur (1826 – 1903) coined the term ‘Platyhelminthes’ and included 4 Classes viz., Turbellaria, Trematoda, Cestoda and Nimertea but Charles Sedgwick Minot (1876) excluded Nemerteans from Platyhelminthes.

There is no coelom, as embryonic mesoderm remains as a solid mass (layer) and the space between the endoderm (gut wall) and the ectoderm (body wall) remains filled with  mesodermal tissue called mesenchyme [Gk. mesos = middle + enkhyma = infusion] i.e., a layer infused in the middle; often called ‘packing tissue’ or parenchyma [Gk. para = beside + enkhyma = infusion] i.e., something poured in beside].

●       Monoecious (hermaphroditic) [Gk. mono = alone, single, one + oiki (on) or oikos = house]; the term used to explain ‘one house’ of male and female organs i.e., male and female sex organs present on the same individual (= hermaphrodite) [= Gk. Hermes + Aphrodite = hermaphrodites]; a mythical son of Hermes and Aphrodite who merged their bodies with a naiad and thereafter possessed both male and female qualities. Hermes was a herald and messenger of God; the Aphrodite a goddess of beauty and love, born when Cronus castrated his father Uranus and threw his genitalia into the sea and naiad a female deity associated with water.

●        Tubulanus: [Latin tubus = tube or pipe] i.e., most species secrete cellophane or parchment-like tubes; but typically living among algal holdfasts, within crevices in sand and under rocks; or in fossil reef overgrown by ‘worm reef’ produced by Polychaete worms. Pacific coast of North America to North Europe and the Mediterranean. 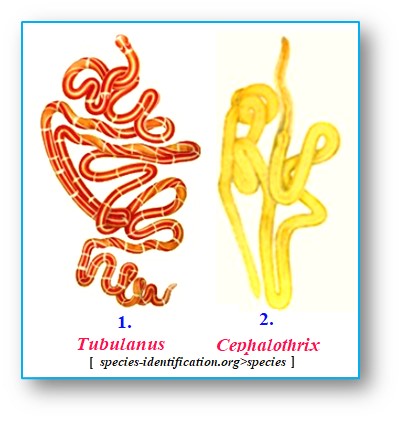 Order – Heteronimertea: [Gk. heteros = different (other party or another)] i.e., the Nemerteans which are ‘different’ in having a proboscis being divided into many ‘proboscides’ which appear as a mass of worm-like structures when everted.

●        Cerebratulus: [L. cerebrum = brain + ulus, diminutive suffix] i.e., the coiled worm resembles with the convolutions on the human brain. Behind mouth the body becomes dorso-ventrally flattened and often has wrinkles and folds which gives the worm its convoluted appearance. Native to the Northern Hemisphere, in the Arctic and North Atlantic Ocean.

●        Micrura: (Gk. mikros = small + oura = tail] i.e., a slender worm with a pale caudal cirrus. Scandinavia to the British Isles and the Mediterranean. 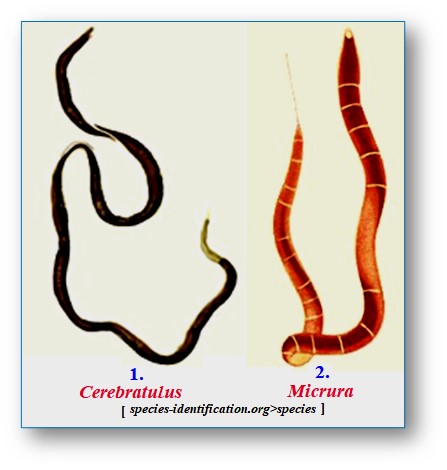 2. Class – Enopla [Gk. enoplos = armed] i.e., the Nemertean worms with stylets (one to many) on proboscis. Mouth located underneath but ahead of the brain. Nerve cords running inside body-wall muscles.

Order – Hoplonemertea [Gk. hoplos = tool, weapon; a wooden shield carried by some warriors in ancient Greece  + nemertea] i.e., worms armed with stylet(s) [ = Enopla and Hoplonemertea are synonyms]. Most are benthic commensals or parasites.

●        Amphiporus: [Gk. amphi = two, both, on both sides + L. porus = pore] i.e., anterior margin of head with numerous very small eyes arranged in ‘two’ diffuse groups ‘on either side of the head’. Two white spots are also found ‘on either side of the head’ [ appearing as if these are pores]. Found from the Mediterranean and north coasts of Europe to the Atlantic and Arctic coasts of North America. 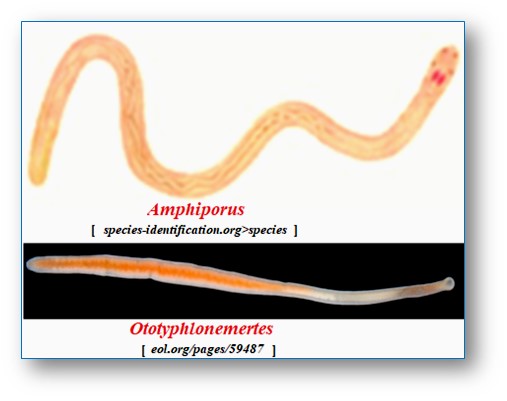 ●        Geonemertes: [Gk. geo = earth + nemertes] i.e., the most prominent ‘terrestrial’ Nemertean worm, commonly found in the most soil of the gardens, nurseries. The anterior end is pointed whereas the posterior one is club-shaped. The dorso-ventrally flattened body is creamish-white on the flat ventral surface, the dorsal surface being with 6 dark stripes (alternating with creamish-white stripes), 2 on the extreme flanks and 4 along the dorsum. Small-sized and thinner, dark chocolate-coloured specimens are not uncommon. 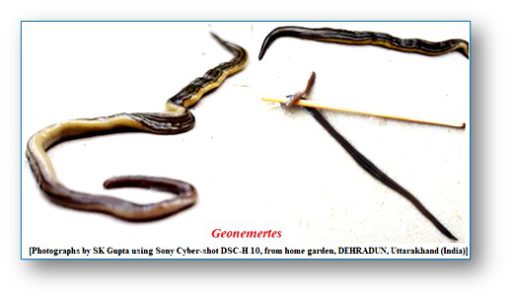 The Nimertean worm (Geonimertes sp.), crawling gently on the wet floor close to home garden. Cilia on the ventral surface move the animal in a gliding fashion. The animal secretes copious amount of mucus in which it glides, leaving a trail of mucus behind. The worm is negatively photoklinotactic and thus the swaying lateral movements of head are peculiar to watch. Watch the pointed anterior end exhibiting shortening and widening due to muscular action. Contactions of circular muscles are making the worm thinner and more elongated whereas contractions of longitudinal muscles are making the animal shorter and wider. When crawling across a solid surface (as shown in the video) worm is moving in a manner similar to earthworm by peristaltic waves of muscle contraction alternately shortening and elongating the body.

Order – Bdellonemertea [Gk. bdella = leech + nemertea] i.e., the body of these Nemerteans is ‘leech-like’, with a posterior sucker, used for locomotion. Stylets on proboscis absent.

A FIELD NOTE ON Geonemertes (?)

The distribution of ‘terrestrial Nemerteans’ is of particular interest in that they primarily occupy oceanic islands. Geonimertes palaensis, the most widespread species, is recorded from Islands in the Pacific and Indian Oceans and the Caribbean, as well as Florida, USA and Japan. In 1943, a land Nemertine (Geonemertes dengyi) was recorded from Western Australia. In 1969, all terrestrial Nemertines were assigned to one Genus – Geonemertes.

There appear to be three groups of species identified from Indopacific, Australia and New Zealand and three separate species from Atlantic Islands. In the Indopacific, G. palaensis was the first land nemeretine ever found on the Pelew Islands (Republic of Palau in Pacific Ocean, consisting of more than 250 islands, southeast of Philippines, in Oceania) and has since been recorded from Kei, Celebes, Samoa, the Caroline Islands, Sri Lanka, Samurai, New Guinea, Mahe in the Seychelles, Mauritius and the Philippines.

The specimens noticed by the author (SK Gupta) are probably the lineage of the same Geonemertes (?) which have invaded the Indian soil through human activities as narrated in the following publications:

Keep on venturing more into the fantastic world of Etymology and feel NEMERTEAN– friendly!!!