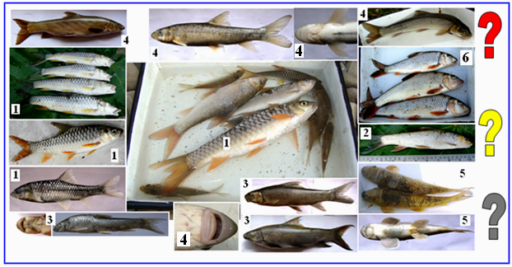 [Being more fish samples involved; Segregation of Lot 12, is made available in 2 Parts,

A recapitulation from Part I:

The sorting of some fishes in the field was made on the basis of the elongated, cylindrical or compressed body with long caudal peduncle, deeply forked caudal fin, very large (somewhat hexagonal) to small scales, orange or yellowish or pinkish hue on the fins, shining silvery to dull grey-black or brown shades etc.

They were placed under Lot 12, collectively labeled as Minnows or Minor Carps or Mahseers or Suckerfish and numbered 1 to 6 in the assemblage as shown in the photograph below. 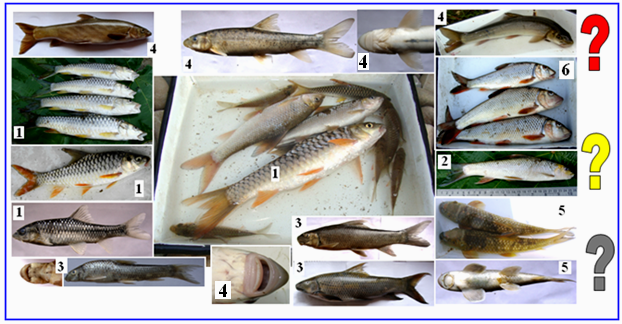 The criteria decided in the field for segregation of genera/species represented by the individuals numbered 1 – 6 [in the photograph above] are as shown in the TABLE below: The individuals having smallest scales (among the members of the entire Lot 12) and dark brown or silvery-grey body are found belonging to 2 closely related Genera viz., Schizothorax and Schizothoraichthyes (commonly called Snow Trouts) [Family – Cyprinidae, Subfamily – Barbinae; Minnows or Carps].

Based on the colouration of body the above referred genera are represented by 1 species each, commonly found in the rheophilic environment of Doon valley between 300 – 900m msl. 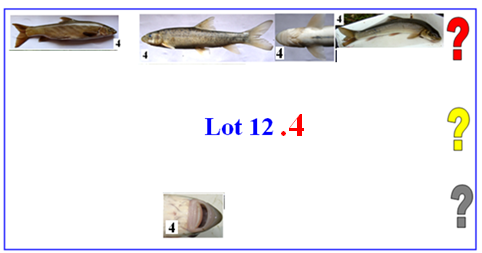 The characterization of each species of Lot 12.4 is as under:

CLICK HERE TO VIEW DIAGRAM 14.3 FROM THE PAGES OF ‘General and Applied Ichthyology (Fish and Fisheries)’ Chapter – 14 ‘Hill-stream Fishes’ by SK Gupta. The individuals having an adhesive disc on the chin (lower lip) are found to be represented by only 1 Genus and 1 species, Garra gotyla gotyla [Family – Cyprinidae], commonly found in the rheophilic environment of Doon valley between 300 – 900m msl. The characterization of the species is as under:

A PLATE VII FROM THE PAGES The individuals, identified in the field and kept in Lot 12 at No. 6, are found to be diagnostically deep-bodied (amongst the rest 1 to 5), silvery pinkish with moderate-sized scales, each with a dark spot at the base (like Barilius bendelisis, Lot 3) in upper 3/4th of body. Also the inhabitant of rheophilic, clean-watered, deeper environment, this sample is of a curious ‘median Carp’, belonging to Genus Chagunius, with one species Chagunius chagunio [Family – Cyprinidae].

Chagunius chagunio: Silvery pinkish with moderate-sized scales, each with a dark spot at the base (akin to Barilius bendelisis, Lot 3) in upper 3/4th of body. More sharply exhibiting sex distinguishing characters, it is characterized as under:

Body elongated and compressed laterally. Head conical. Snout bluntly squarish with prominent transverse depression across. Mouth subterminal, ‘U’-shaped. Lips thick, upper one more papillated (in mature males) with fleshy flap on either side; lower lip with a pad on the ventral side with a central depression and striations (a device useful for clinging in rheophilic environment). Barbels 2 pairs, the maxillary longer than the rostral. Undivided ray of the dorsal fin strong and serrated. Uniform bright silvery (more when young) to dull silvery with pinkish hue. Olive-greenish along the dorsum. Each scale with dark spot at the base on upper 3/4th of the body (not prominent in younger specimens); sometimes the dark spots giving the appearance of a dark band along the lateral line. Fins yellowish. Dorsal and caudal suffused with scarlet red and edged black. Pectorals darker to fainter black, intermingled with reddish tinge. Pelvics and anal edged red. 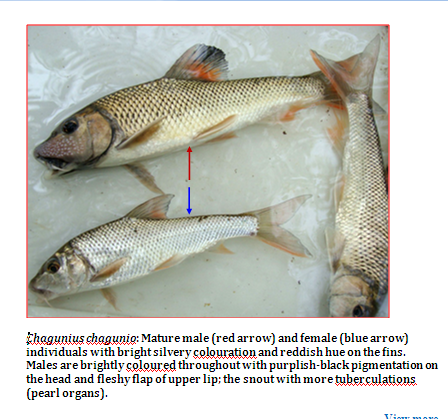 The important points of sex distinction in Chagunius chagunio are sorted in the following TABLE: 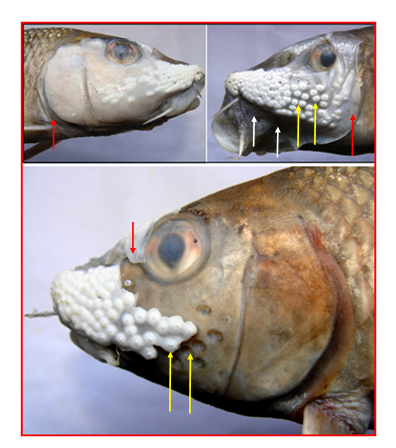 Tor sp. follow a wide altitudinal range between 300 and 900m msl and are especially favourite for Ganges in Uttarakhand (India) at pilgrimages like Haridwar and Rishikesh (forming temple sanctuaries) and further upstream at higher altitudes like Srinagar, Dev Prayag, Karn Prayag, Tehri etc.

Tor putitora is the dominant species as compared to Tor tor, Tor chelynoides preferring a relatively colder regime above 700m msl, as evidenced by their presence along with the catches of Schizothorax or Schizothoraichthys sp.

Garra gotyla gotyla prefers most turbulent streams, the suctorial disc being advantageous for clinging to stones/rocks. Crossocheilus latius has a habit of venturing over gravel and stony bottom of hilly-streams.

Chagunius chagunio is specially characteristic and abundant in forested tracts of Suswa and Song in the Eastern Doon (more frequent in Suswa stretch) as compared to the Asan river of the Western Doon.

Photographs of habitat preferences by species segregated out of Lot – 12 Asan River at Herbertpur (Western Doon): The deeper, stony and pebbly bed, found to be ideal dwelling ground for Labeo and Garra sp.; with occasional catches of Tor putitora.

Besides, various active and passive methods are also used locally; the former including stream flow diversion, Jaal, Fatiyala (a triangular net), Karonch (a scoop net), Cloth (dragging device), Kanta (Angling) etc. while the latter including Katori or Channi (a pot-trap), Goda (made of bamboo strips), Parchi (a trap also made of bamboo sticks), Atwal (a kind of drift-net), Faans or Fanda (long nylon twine with loops) etc. 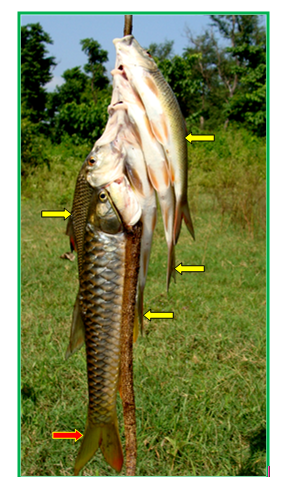 The segregation of species out of Lot – 13, belonging to Genus Aspidoparia .

An improvisation and compilation by Dr. S.K. Gupta