SHASHI KANT GUPTA (SK Gupta), son of late Shri Om Prakash Gupta, then Principal of Sadhu Ram Intermediate College, Dehradun (w.e.f. 1949 – 1985), was born on 25th April, 1950. A 1943 Graduate (B.Sc. Ag.) my father was well-versed to teach Biology (to High School Classes; he wrote 2 Books on Biology – (Saral Jantu Vigyan and Saral Vanaspati Vigyan) and English Literature (culminating in writing English Grammer Books from Class 6th up to Intermediate). Not only this, he endeavored designing book on Economics (being M.A. Economics) for Intermediate Classes. He was a great disciplinarian and famous for his principles, a rare sight to see in the present scenario.

As per the destiny destined, a son of teacher also became a teacher, carried his father’s legacy and worked for the cause of education. It only happened after passing out as a ZOOLOGY (Fish and Fisheries) Post-Graduate from the esteemed DAV (PG) College, Dehradun (now in Uttarakhand) in 1971 (then in Uttar Pradesh). October 23rd, 1971 was the day to witness destiny proven, getting an appointment as a Lecturer, about 900 km away from Dehradun, in a PG College, then affiliated to Kanpur University (now to Bundelkhand University, Jhansi), named after the first Prime Minister of India i.e., Pt. Jawaharlal Nehru (PG) College, BANDA (UP), in a district famous on account of the place of ‘exile’ of Lord Rama, Chitrakoot Dham (falling under Chitrakoot Dham Karwi District).

About 30 years of teaching to B.Sc. students (and M.Sc. students during 1997 – 1999) there was an excellent experience to teach those thronging from backward rural background. Whatever was instructed or taught was proven by the examination results. These old golden days always lurk in mind. “That was a Golden Period of my teaching career, enjoying not only teaching but extracurricular activities, too”.

During the stay at Banda, D.Phil. degree work (Faunal and Ecological Studies on the Fishes of Banda district) was accomplished (1975 – 1982) with the outcome of recording 84 fish species. During 1982-1983 a minor research project, Sponsored by UGC, ‘Limnological Studies on River Paisuni at Chitrakoot Dham in Banda district with special reference to the Ecomorphology of Ichthyofauna’ was also undertaken.

July, 1st, 2000 was another day when the destiny again played its role, as it was also destined to teach and work for the cause of education in the city where the prime childhood and whole education was accomplished i.e., DEHRADUN (Uttarakhand). It is on account of unilateral transfer scheme of then UP Govt., services were got transferred to esteemed DBS (PG) College.

Another 10 year teaching span was a different experience, as compared to the previous college, teaching to masses from elite class and also those coming from hilly districts. This tenure saw boost to research guidance and accomplishment of two major research project viz., ‘Survey of Wetlands of UP and Uttaranchal under the project entitled: ‘Prioritizing Wetlands for formulation of Protected Area Network of Wetlands’ (Highlighting the migratory and resident aquatic bird count, fish varieties, socio-economic condition of the local inhabitants etc.) [Dec. 2001- Jan.2002: UNDP / MOEF , SACON and Zoological Survey of India, Dehradun] and ‘A comparative study of biotic diversity in the streams of eastern and western Doon with special reference to the Ichthyofaunal status’ [2007-2008 Uttarakhand State Council for Science and Technology]

Working with Fish taxonomy had been a great fascination for me, besides having keen interest in drawing and painting, writing articles in Hindi or English, authoring books, listening music (a fan of the legendry Mohd. Rafi).

Improvisations adopted during study period and teaching tenure proved fruitful as evidenced by the success achieved by the students in classroom work, examination or professional life. Teaching, both in Hindi and English was an additional advantage as it catered well to the needs of Hindi medium and English medium students. Laying more emphasis on the ‘meaning of technical terms’ has/had been a prime strategy to deal with any topic and making it easy to understand. As ‘Diagrams’ are the essential tools for a Biologist, a stress is always laid on supporting the textual matter with neat and well-labeled diagrams. Similarly, preparing attractive ‘Practical Record(s)’ was also a part of teaching strategy. All this enabled students (those who practiced) to develop creativity skills. How to score good marks in examination was also a part of counseling and teaching?

After 10 years of retirement, still there is always to share feelings of a ‘TEACHER’ and ponder upon the deteriorating educational scenario in Indian perspective. To work always for the cause of education had been destined about 50 years back

Some of my Works 26th November, 2019: Joyous moments, while speaking to Students of Dolphin Institute of Biomediacal and Natural Sciences, Manduwala, Dehradun (Uttarakhand) on the occasion of a Workshop on TAXONOMY. Appreciation of the author (S.K. Gupta)

Of the book on ‘General and Applied Ichthyology

Assistance was extended to a team of research scholars from Cornell University, Ithaca, New York, which was on a Fish Survey tour to India regarding the occurrence of Danio species. Help was rendered to them while on a collection tour to Banda district , particularly Chitrakoot Dham . 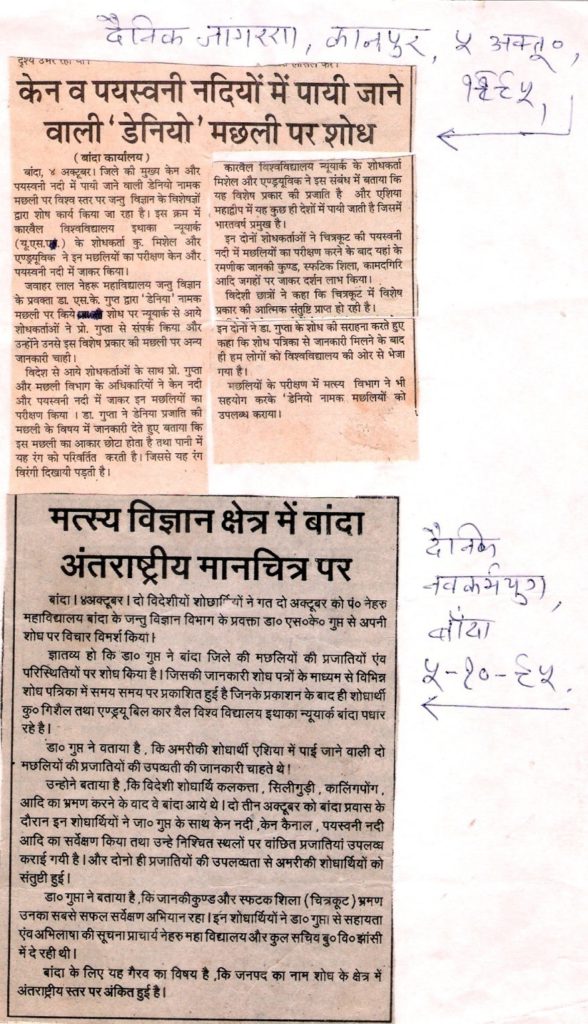 1982-1983: Limnological Studies on River Paisuni at Chitrakoot Dham in Banda district with special reference to the Ecomorphology of Ichthyofauna

‘Survey of Wetlands of UP and Uttaranchal under the project entitled : ‘Prioritizing Wetlands for formulation of Protected Area Network of Wetlands’. (Highlighting the migratory and resident aquatic bird count, fish varieties, socio-economic condition of the local inhabitants etc.)

Objectives to be achieved were:

IVth All India Seminar on Ichthyology

Vth All India Seminar on Ichthyology

National Seminar on the role of young Scientists in the National Development, MM College, Modinagar, Sept. 14-18 , 1989.

Training course on collection , preservation and identification of Zoological Specimens

National Conference on IPR issues and opportunities in Research and Education

National Seminar on Challenges and opportunities of Higher Education in Uttaranchal

National Seminar on Economics of Waste Management in the Indian Economy

National Seminar on ‘Einstein and Peace for Today and Tomorrow'