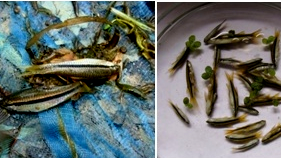 Sort out the fish(es) with a dark bluish black band running from snout to the base of caudal fin:

……… place them labeled as either Rasbora or Esomus sp.

This lot of fishes is generally found frequenting shallow, quiet, clear waters where there is thick growth of marginal emergent or submerged aquatic vegetation, prevalent at downstream sections of Song and Suswa of Eastern Doon and Asan, Tons and Yamuna of Western Doon. They are often found mixed with the shoals of fishes characterized under Lot 6, 7 & 8.

These fishes with a dark bluish black band running from snout to the base of caudal fin can be characterized mainly on the basis of the following:

Body elongated, compressed laterally; dorsal profile gradually arching up to base of the dorsal fin, whence declining sharply up to base of caudal. Outer ray of pectoral, pelvic and anal much prolonged; the pectoral one being more filamentous and reaching beyond base of the pelvics. Of the two pairs of barbels, the maxillary is quite long, extending beyond base of pelvics; the rostral one is smaller extending beyond middle (sometimes up to hinder edge) of eye orbit. Lips thin. Gape of mouth oblique, directed upwards. Whole body, including the fins lemon yellow, darkly pigmented on the nape with a mid-dorsal darkly pigmented streak and a bluish-black band on the mid-lateral side commencing at the tip of snout and after crossing over the eye, ends at the base of caudal, the faint blackish shade extending up to the caudal fork.

Body elongated, laterally compressed. Dorsal profile more arched than the ventral. Opening of mouth undulating; the cleft being oblique; lower jaw having one central and two lateral prominences fitting into corresponding emarginations of the upper jaw. Dark greenish along the back, more silvery on the lower flanks with a characteristic dark bluish-black band on the mid lateral side commencing at the snout, crossing over the eye and terminating at the base of caudal fin, the dark shade continuing up to the fork. When live, the lateral dark band exhibits the presence of a parallel, adjacent, dorsally running golden hued band. Fins lemon yellow.

Live Rasbora, kept in a jar along with Puntius sp. just after catch.

Live Rasbora, kept in a jar just after catch.