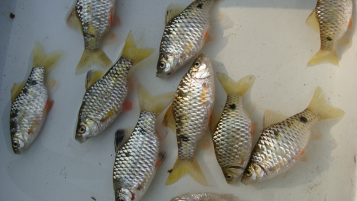 Sort out small sized fishes with a prominent BLACK BLOTCH at the base of caudal fin, along with one behind gill cover or one at the base of  dorsal  fin:

Live specimens of Puntius (=Pethia) sp. Mark the presence of a prominent black blotch on the caudal peduncle in most samples. While swimming one may also watch a black banded fish (Rasbora deniconius of Lot 5) and for a while a fish with an ocellus at the end of the long dorsal fin (young of Channa gachua or orientalis to segregated under Lot 10 of ‘Snake Heads or Murrels).

Usually, they are procured from slow running, marginal, shallow or weedy/swampy niches.

These medium-sized, somewhat diamond shaped, laterally compressed, brightly coloured, shining silvery fishes, having DARK BLACK BLOTCH (beauty-spot) at the base of caudal    fin and / or just behind operculum and / or on the base of the dorsal fin, are supposed to belong to Genus – Puntius (= PethiaorSystomus).

This lot can now be segregated into at least 5 species, as represented in the stream of Doon Valley (other places, too), on the basis of the following diagnosis. 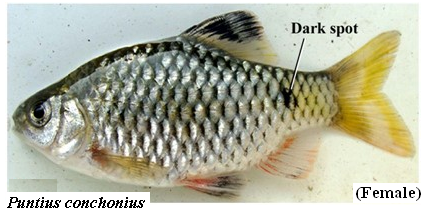 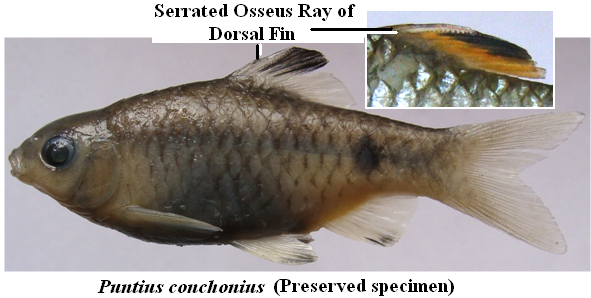 Live specimens of Puntius (=Pethia) sp. It will be fascinating to watch a fish swimming in front; mark its dorsal fin with serrated undivided fin ray (identified as Puntius [=Pethia] ticto). 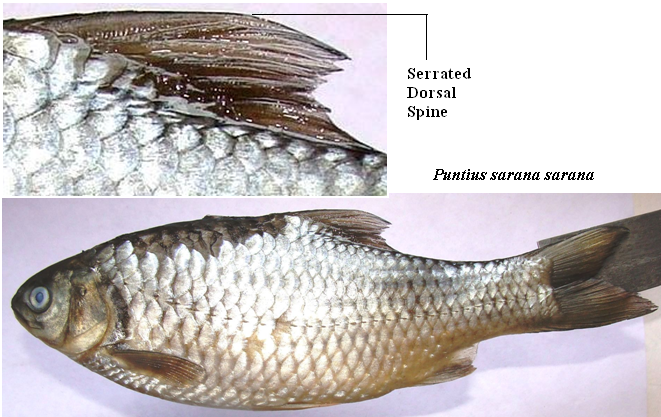 P. sophore can be readily identified on account of the presence of a diffused black blotch at the base of caudal (covering 21-22 scales and partly covering 6-7 surrounding scales) and similarly diffused one at the base of the dorsal. Fins are tinged orange at the tips. Pecorals yellowish. Most prominently, large specimens (70 – 95 mm) show the presence of a scarlet- red lateral band extending from behind the operculum to the base of caudal fin, the continuity becoming obvious up to the fork of the fin. After preservation , the scarlet red band gradually fades-out , otherwise there remains a faint blackish band. 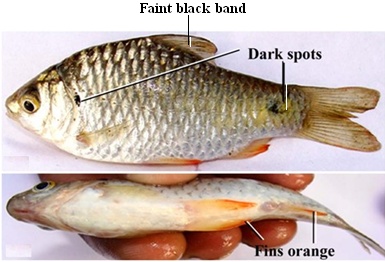